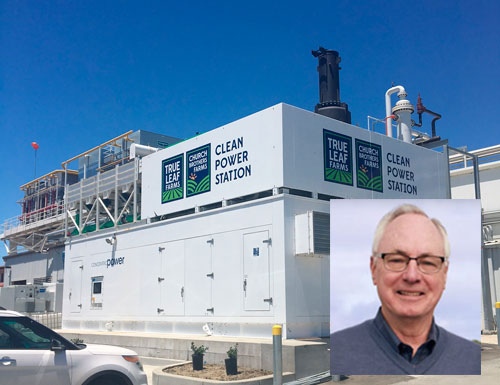 Church Brothers Farms is doubling down on its commitment to being a leader in AgTech with the unveiling of a first-of-its-kind technology clean energy solution this week. The company debuted its Clean Power Station, a cogeneration system, during the 2017 Forbes AgTech Summit field tour at the True Leaf Farms processing plant in San Juan Bautista, California.

Cogeneration, which is also referred to as cogen or Combined Heat and Power (CHP), is when electricity and heat is produced from a single fuel source. Powered by a natural gas fueled engine, a cogeneration system is a highly efficient way of capturing heat that would otherwise be lost during the production of electricity.

“A cogeneration system is flexible and reliable because of its efficient use of energy,” explains Steve Church, Co-Chairman. “We decided to make this investment because it helps us do more with less, energy wise; it creates less emissions making our operation more sustainable; and gives us independence about how we procure our energy. Concentric Power re-engineered how we produce cold air and water for our salad processing facility.”

Church Brothers Farms’ new cogeneration plant also provides an additional step, according to a press release, where the thermal energy (heat) becomes cold with the use of an aqueous ammonia absorption chiller. Due to this extra step, the company explained that the plant will generate 2MW of electric power, which will then be used to run its state-of-the-art processing facility. As an added bonus, the process will recover enough heat to provide 300 tons of low temperature refrigeration.

“Our full scale commercial projects create fewer emissions while increasing sustainability and enabling businesses to produce their own energy,” said Brian Curtis, CEO and Founder of Concentric Power. “We’re excited about the Clean Power Station we established with True Leaf Farms. Church Brothers and Concentric Power are committed to sustainability, independence and efficiency.”

When fully operational the cogen system at the True Leaf Farms processing facility will reduce the company’s carbon emissions by 25 percent, the release reports, allowing the company to return power into the grid. A cogen system is also controllable, which will allow True Leaf Farms to control when it is on or off, a luxury not available when using solar or wind power. Concentric Power uses a patented control system, which enables a smart software layer and maximizes technical efficiencies and economic results.

Want to learn more about this unique clean energy technology that provides the company with economical savings and increased long-term sustainability? Check out ChurchBrothers.com